An ear infection (sometimes called acute otitis media) is an infection of the middle ear, the air-filled space behind the eardrum that contains the small, vibrating bones of the ear. Children are more likely than adults to get ear infections. 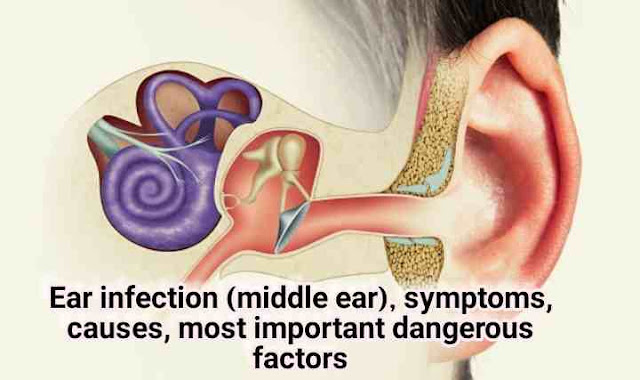 Because ear infections often go away on their own, treatment may begin with pain control and monitoring for the problem. Sometimes, antibiotics are used to clear the infection. Some people are prone to getting multiple ear infections. This can cause hearing problems and other serious complications.

The signs and symptoms of an ear infection usually develop quickly.

Common signs and symptoms in children include:

Common signs and symptoms in adults include:

When to see a doctor when otitis media

Ear infection signs and symptoms can indicate several conditions. It is important to get an accurate diagnosis and prompt treatment. Call your child's doctor if:

An ear infection is caused by a bacteria or virus in the middle ear. This infection often results from another illness — a cold, the flu, or an allergy — that causes congestion and swelling in the nasal passages, throat, and eustachian tubes.

The role of the eustachian tubes

The Eustachian tubes are a pair of narrow tubes that run from each middle ear to the top of the back of the throat, behind the nasal passages. The throat end of the tubes opens and closes to:

In children, the eustachian tubes are narrower and more horizontal, making their drainage more difficult and more prone to blockage.

The role of the adenoids

The adenoids are two small pads of tissue at the back of the nose that are thought to play a role in immune system activity.

Since the adenoids are near the opening of the Eustachian tubes, the swelling of the adenoids can block the tubes. This can lead to otitis media. Swollen and irritated adenoids are more likely to play a role in ear infections in children because children have relatively larger adenoids compared to adults.

The following tips may reduce your risk of developing an ear infection: