You know the synopsis of The Witcher: He's reunited and he's feeling alright now

The first season of The Witcher was hard to follow. The reason was, in no small part, because the show had three main characters — Geralt, Yennefer, and Ciri — operating in three different timelines that rarely skipped. Geralt and Yennefer only met after Yennefer had finished her training at Aretuza. Ciri and Geralt only found each other in the aftermath of the Battle of Suden Hill. Yennefer and Ciri never met.

So "My dear friend..." represents a pivotal moment in the show: the first time Geralt, Yennefer, and Ciri were in the same room together. This huge, long-awaited moment occurs at the Temple of Miglitli, where Geralt takes Ciri after becoming a witch (maybe!) or dying (statistically more likely!). 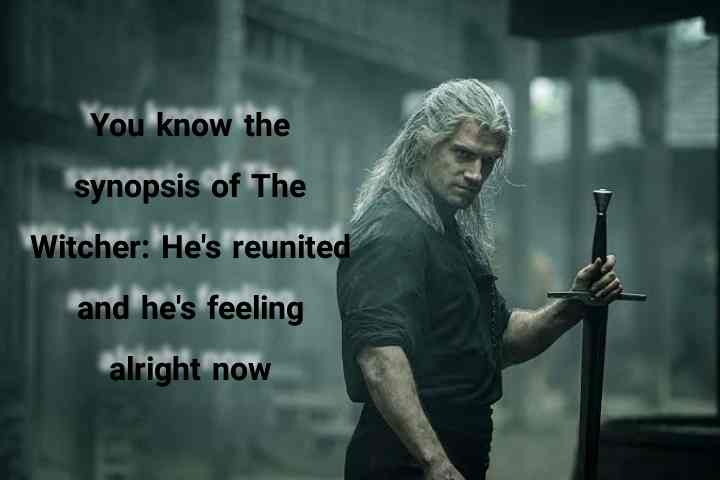 The temple is where Geralt trained in basic magic as a young wizard, which he now uses to enchant monsters or push objects using telekinesis. But in addition to this useful training, it is clear that the temple is one of the safest and happiest places in which Geralt had a difficult childhood. It's a place where Geralt has to check his swords at the door because fighting and politics are strictly forbidden. It is also a place where he can seek advice from Nenneke, the warm and wise priestess who keeps the temple working. Most of all, it's a place where the biggest danger to Ciri seems to be an awkward boy with an obvious liking for her. This seems like an acceptable compromise considering the monsters they've been battling all season.

But as Geralt and Ciri should have learned by now, an enemy can appear in the guise of an ally - even if she wishes things were different. Enter Yennefer, who has arrived at the Temple of Melitele in search of the girl you promised to the dead mother. It's not as if Yennefer wants to betray Geralt and Ciri; She struck the deal before she had any idea what Geralt's Child of Surprise would look like. But as you would have learned from any good fairy tale, there is always an ironic consequence when you make a deal with a witch.

Before those sequels come home — and after Ciri awkwardly interrupts Geralt and Yennfer's passionate kiss — we get a cute, comforting sight of the trio chatting and enjoying each other's company, joking about the existence of unicorns. Like the previous surrogate family that Geralt, Triss, and Ciri formed in Kaer Morhen, you can imagine how these three battered and bruised people could find in each other the strength and support they needed all along.

It can't go on, of course. For one thing, Yennefer won't understand what she's doing in temple (even though Geralt's advanced senses pick up on her abnormally fast heartbeat). On the other hand, there is the small matter of a magical assassin named Rience - who Yennefer succinctly and helpfully described as a "fire-distractor" - who is still completely bent on capturing Ciri for his as-yet-unidentified employer.

That night, Raines and his companions arrived at the temple ready to lift Hell. As it turns out, the rule against combat and politics doesn't matter much to a magical killer. While Yennefer runs with Ciri, Geralt stays behind, and The Witcher delivers one of the best non-monster fight scenes of his career. At one point, Geralt punches a guy in the face and we get a nice long shot in the slow motion of bloody teeth flying out of his mouth. Another time, he used his Aard to blast a man in the air, then held a dagger upright so that the man's face landed directly on him. Gravity takes care of the rest.

All the while, Yennefer and Ciri are stuck behind a locked door with Rience doing his best to smash him from the other side. But if Yennefer loses her magic, she can at least train Ciri how to use it. After a quick-fire lesson, Ciri creates a portal, and she and Yennefer depart for an unknown location. Once again, our heroes are spread across the continent. Once again, Geralt was alone.

The episode isn't long here, but it's sad to think of Geralt at this moment apart from the kid he'd recently realized he wanted. One of the advantages of Season 1's quirky schedule was that we spent a lot of time with Geralt as a solitary and taciturn character.

But if his love for Yennefer was the first crack in his fragile exterior, fatherhood seems to have broken him wide open. The second season is built around the softer and kinder Geralt, protecting and educating Ciri while doing his best to steer her away from the difficult path he had to walk. Now that they're separated again - and with what seems to be the entire continent haunting them - we'll see what Ciri can do with all she's learned.