The Piazza di Spagna and "Scalina Spagna" is a fine example of the Italian Baroque style, one of the most visited squares in Rome, and one of the most beautiful tourist destinations in Europe. 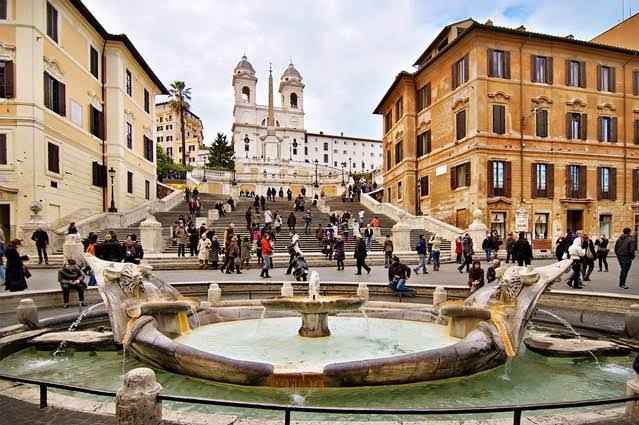 The Piazza di Spagna (English: Square of Spain) is one of the most famous (piazzas in Rome and The best tourist destinations in Europe). The name comes from Palazzo di Spagna, seat of the Spanish Embassy to the Vatican that has been in this square since the 17th century.

Piazza di Spagna is found in one of Rome's most famous neighborhoods, close to the main streets Via dei Condotti, Via Frattina and Via del Babuino, which is home to many wonderful villas from the 17th and 18th centuries.

If you walk down Via del Babuino, you will come to Piazza del Popolo. In the center of the square is the Obelisk of Flaminio, one of the tallest obelisks in Rome, which was located in the Circus Maximus.

For some of the best views of Rome, climb the stairs from Piazza del Popolo to the top of Pincian Hill.

The Spanish Stairs (Scalinata di Trinità dei Monti in Italian) were built at the beginning of the 18th century connecting Piazza di Spagna and the Church of the Trinità dei Monti. It is one of the most famous areas of Rome.

Every July, the square and 135 steps are decorated to receive the Donne Sotto le Stelle fashion show.

The staircase is a favorite place for tourists to sit, relax and enjoy the views of Piazza di Spagna.

Fontana della Barcaccia (The Ugly Boat Fountain) was designed by Pietro Bernini, father of the famous Gian Lorenzo Bernini, who later helped create. It was completed in 1627 and Pope Urban III placed it in the center of Piazza di Spagna.

The Fontana della Barcaccia is shaped like a boat and has the crests of the Barberini family (the noble Pope Urban III family), bees, and the sun engraved.