If he was mentioned in front of "Ancient Egypt", what would come to your mind? Perhaps you have seen the Great Pyramid of Giza with the Great Sphinx of Egypt, or the burial mask of Tutankhamun, or some animal-headed deities. Or maybe you thought of mummies.

Mummies may certainly come to mind, but how much did you really know about the famous residents of ancient Egypt? They are much more than just bodies wrapped in linen with their arms crossed on their chests. Read on to see what you may not know about ancient Egyptian mummies.

10: THE PRICE OF MUMMIFICATION 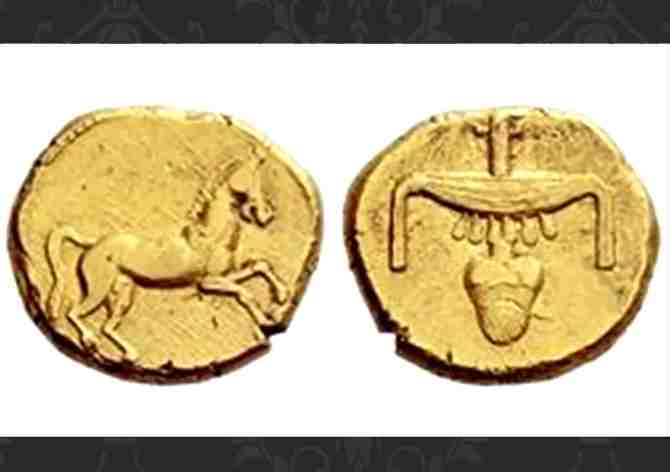 According to the writings of a Greek traveler from 60 to 57 BC, the cost of embalming was one talent of silver, about 30 kilograms (66 pounds), the most expensive embalming. This was during the Ptolemaic period of Egyptian history, when there was some conflict in the ruling family, which could have led to inflation. 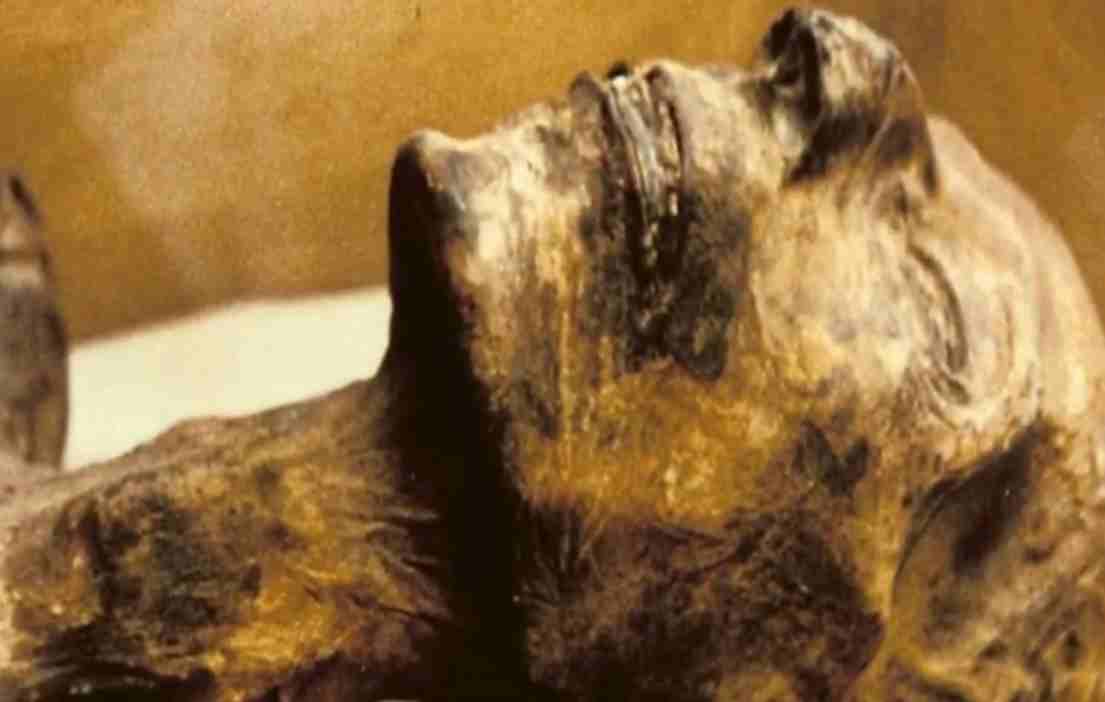 Mummies were used as medicine from AD 400 until the 19th century. The concept was based on the use of natural bitumen, which the Europeans believed the Egyptians mummified. This was completely useless as medicine, as the ancient Egyptians used resin, which mimics bitumen but has no health benefits. In fact, the resin was probably better consumed than bitumen, which was recently found to be a carcinogen.

In the Middle Ages, the wealthy would buy ground mummies to use as medicine, and the belief that mummies were medicinal continued into the 19th century. When mummies were difficult to obtain, dried bodies of criminals were used instead.

The human remains were also ground and mixed with honey to make a sweet medicinal syrup. On some occasions throughout history, people were embalmed in honey (a process known as mummification) specifically for the purpose of switching to this medicine, and claimed to be able to cure any disease. Historically, in some regions of the world, chiefs and priests were embalmed in coffins of honey, but with no intention of medicinal use.

The ancient Egyptians did not begin to use complex embalming procedures until after the development of their early civilization. Initially, the mummies were created naturally from the desert environment of Egypt. The dead were buried in the sand, and the dry environment would preserve the bodies. Anthropologists believe that accidentally discovered bodies that were naturally mummified in the sand and thus recognizable years after death, encouraged the practice of mummification by showing how mummies enjoyed eternal life through minimal decomposition.

Once the Egyptians began to believe that decay was abnormal, they began special operations to preserve the deceased, but it took 800 years for them to begin removing organs to prevent decay. In 3400 BC, the Egyptians began to wrap mummies in linen, but only by 2600 BC did they constantly remove organs. Only 5,500 years ago, mummies began to be buried in tombs and coffins.

Natural mummification still occurs in areas where the bodies are not exposed to air or moisture; Carcasses preserved for hundreds and thousands of years have been found in arid climates such as the deserts of Egypt but also in the tundra and submerged in swamps. 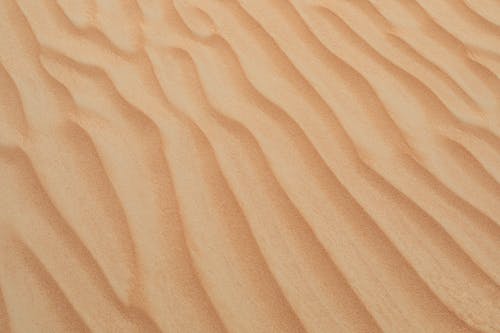 In ancient Egypt, the lower classes could generally afford an incomplete embalming of a mummy. This does not include the sarcophagus or sarcophagus and usually only involves drying the body, with some or all of the organs remaining intact. Brains were considered least important in ancient Egypt and therefore less important in removing them. Early embalming and incomplete embalming often leave the brain intact, which is indicated by a healthy nose.

Sometimes the poor would wrap the dead in cloth and bury them in the desert sands for a few days or weeks to dry them out. After that, the body cavities are washed with solvent, and the body is buried in a cemetery. In contrast, the tombs of the rich and royals were elaborately painted with inscriptions from the Book of the Dead, Pyramid Texts, and Coffin Texts. The division between rich and poor in ancient Egypt is particularly evident in burial practices.

6: PROVIDING FOR THE AFTERLIFE 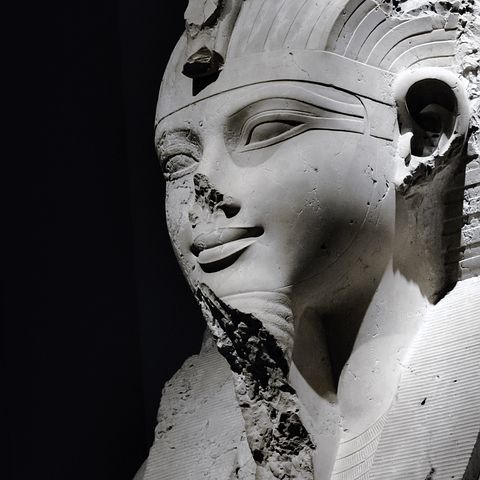 It can be said that mummification was the most important ritual practice of religious law among the ancient Egyptians. The ancient Egyptians believed that mummification was necessary to access the afterlife. They believed that after someone died and was properly embalmed, they would use their physical body during their journey, which is why they preserved the bodies of the deceased.

The religion of the ancient Egyptians was based on death and the afterlife. The practice of mummification became increasingly elaborated, but it was a very important part of the economy of ancient Egypt, where mummies required the services of two servants of hairdressers and beauticians as well as craftsmen to build the sarcophagi of the mummies, not to mention the less developed pyramids and tombs. 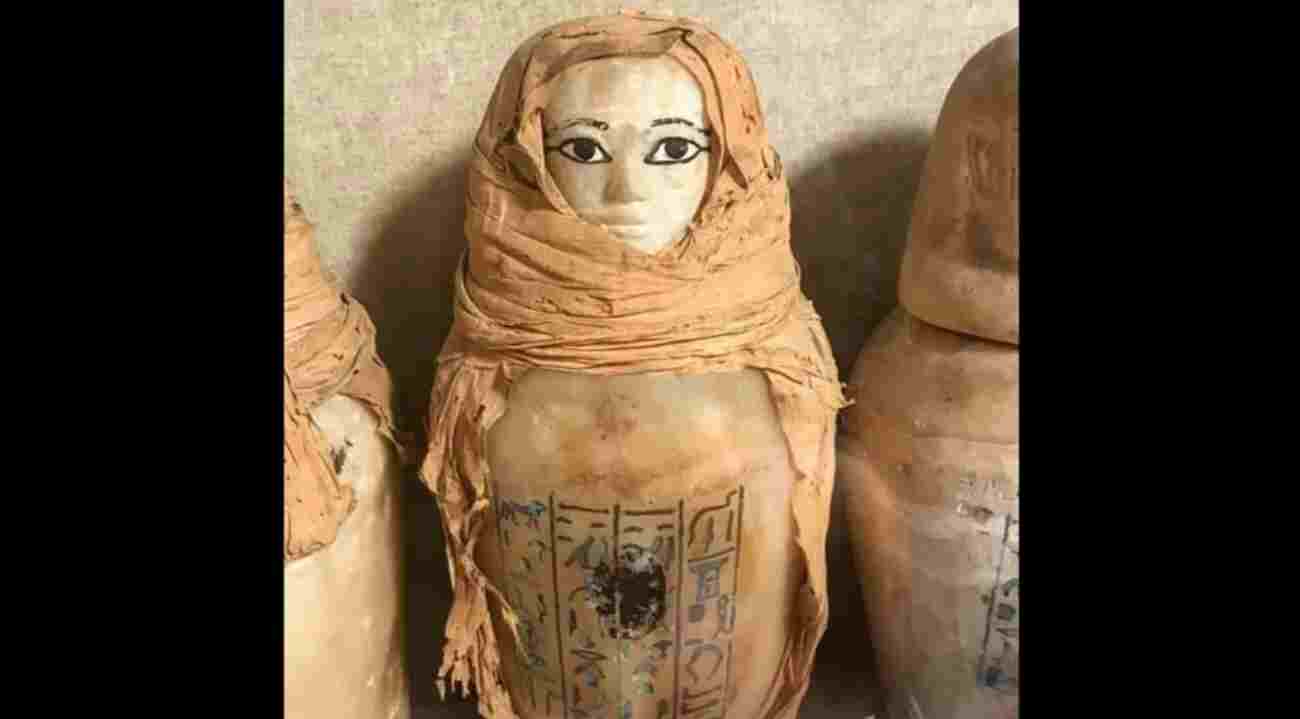 The ancient Egyptians considered the lungs, liver, stomach and intestines to be the most important in embalming. They were exhumed from the corpses and preserved in canopic pots, which were based on four ancient Egyptian deities believed to guard the organs of the deceased, the four sons of Horus. Each canopic jar had a different head, one for a baboon, one for a jackal, one for a human, and one for a hawk.

It is likely that the organs will initially be removed because their presence caused the body of the deceased to decompose more quickly. Over time, this practice developed religiously into the belief that the deceased needed the organs on their journey through the afterlife. 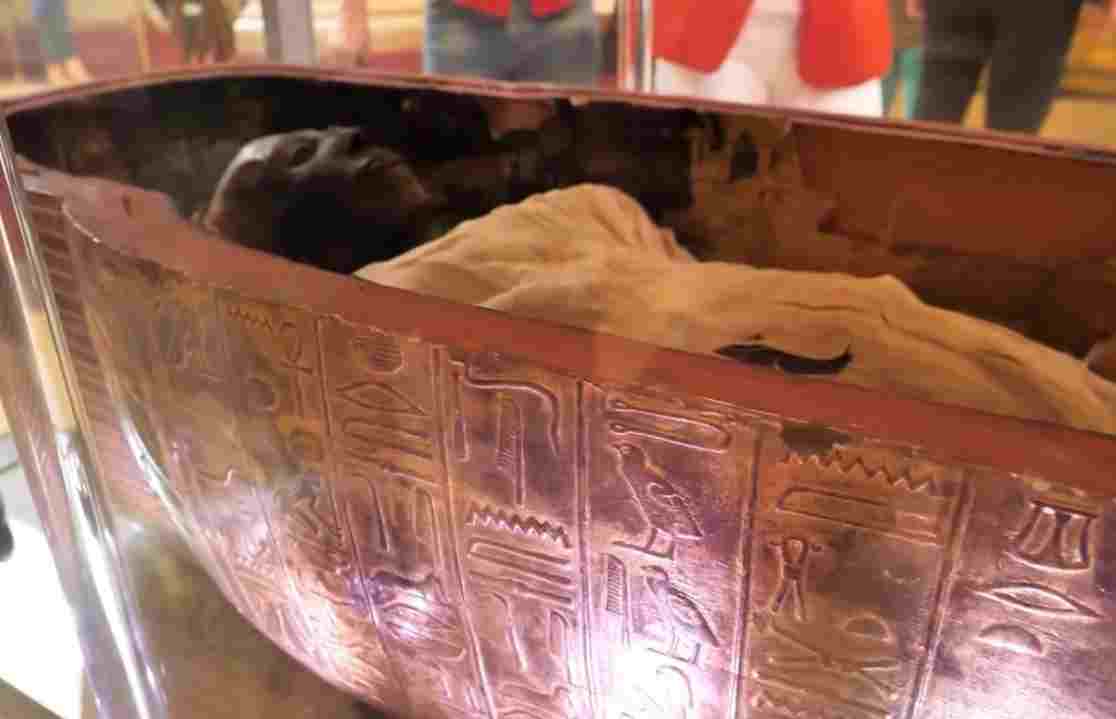 The position of the mummies' arm is really important. For example, the crossed arms on the chest, the image most associated with mummies, was used very specifically for royalty.

Predynastic mummies covered their face, with their arms bent at the elbows. The Old and Middle Kingdoms are indicated by burials with hands on the sides or sometimes across the basin. During the period of Ramses II, mummies were kept with arms crossed on the lower part of the body, and folding the arms with hands on the shoulders indicates a later period of Egyptian history. Crossed arms as commonly perceived in the New Kingdom were used only for males of royal stature. 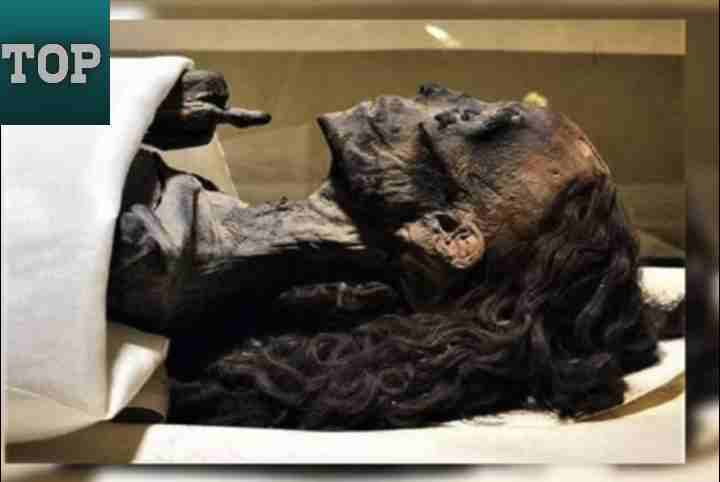 The mummies are highly crafted to look lifelike as well as preserved. During the mummification process, the bodies of the mummies were stained. The men were colored red, and the women were colored yellow. This began during the Third Intermediate Period. Mummies had fake eyes made of glass or stone of this period (small onions were previously used to create the illusion of eyes), and often had wigs or strands woven into their hair. Late period mummies were decorated with gold leaf applied directly to the skin. Some forms of modern makeup take after ancient Egyptian makeup, including kohl, which is a charcoal-based eyeliner.

The ancient Egyptians even painted the nails of mummies for mummification with a form of henna. The use of henna as a tattoo was actually an Egyptian practice, before it was explored in India. Pharaoh Ramses I found on his nails a dark orange color indicating the presence of henna or another dye. Beauticians were an important aspect of Egyptian culture and were considered close to the goddess Hathor. Wigs were another aspect of beauty in ancient Egypt that was an integral part of the typical mummification process. However, wigs were not only intended for the dead, as many Egyptians shaved their heads. 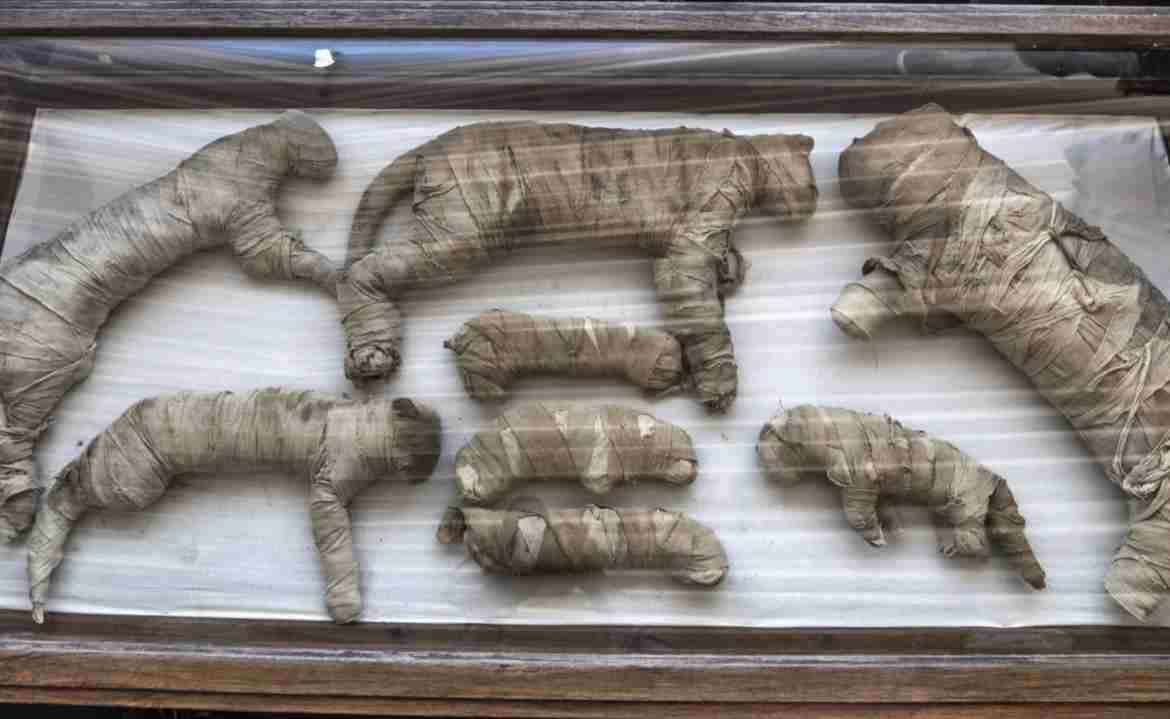 The Egyptians raised animals for mummification. While it is true that the Egyptians did indeed mummify their pets, they also raised and killed animals specifically for the purpose of mummification. These mummies were usually religious offerings, as Egyptian deities were associated with animals, and animals were sometimes considered personifications of the gods. For example, the goddess Bastet was closely related to cats. Animals were buried in special coffins and tombs of the god or goddess that they symbolized or were important to them.

Despite the huge amounts of animal mummies produced in ancient Egypt, care was taken to mummify the animals, but it was not comparable to human mummification, which was incredibly complex and time-consuming. Most of the animal mummies were purchased by people making pilgrimages to the temples of certain gods or deities. For a fee, priests would bury the animals in the temple cemetery as a form of homage to a god or goddess. Among the animals that were also mummified are cats, baboons, fish, crocodiles and bulls.

1: THE CURSE OF THE MUMMY 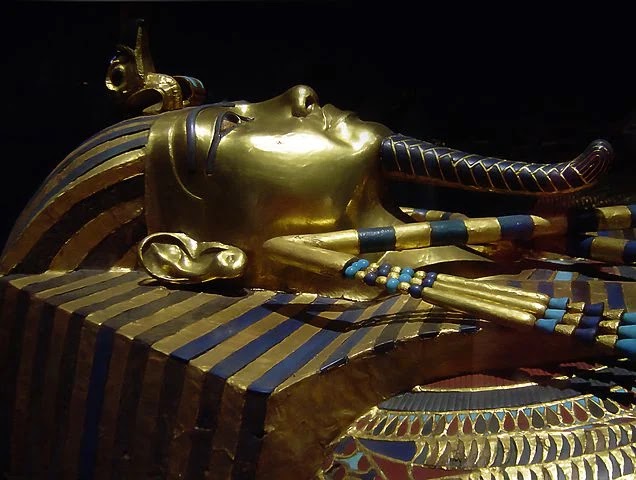 Written warnings against opening Egyptian tombs date back to the Middle Ages and describe the evil and supernatural qualities possessed by mummies. The most famous alleged curse is that of the tomb of King Tutankhamun, or the curse of the pharaoh. The financier of the excavation of the tomb of Tutankhamun died of a disease transmitted by mosquitoes, and Howard Carter, who discovered the tomb, died 16 years later. The idea of ​​the curse was published by the novel's author Sir Arthur Conan Doyle. On that note, Shakespeare also had a form of a curse on his grave to deter the disturbance of grave robbers.

The ancient Egyptians did not invent mummification, nor were they in any way the first ancient civilization to embalm their dead. Mummified bodies have been found all over the world, dating back thousands of years before those were found in Egypt. Although Egyptian embalming is typical of Hollywood, it became a common practice in South America since about 6000 BC. The famous painting The Scream was attributed to a Peruvian mummy that Edvard Munch saw in a museum.

Ice mummies are another example of embalming in South America . In the Inca culture, human sacrifices left on mountaintops were essentially freeze-dried, preserving the body. In North America and Europe, accidental freezing has also resulted in ice mummies, many of them from the Iron Age. Although mummies are generally considered Egyptian, mummies come from all over the world.